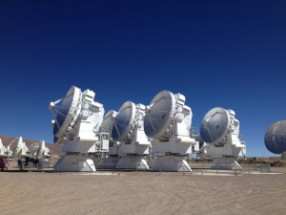 Today our guest Alessandra Ponte gave an enlivened talk on her work on the extreme conditions of the Atacama desert in northen Chile as part of the Future North project seminar series. She chose to shift between Google Earth and Powerpoint. Alessandra zoomed in to show us the rifts and expanses of the Atacama. She flipped over to screens including student works on site, and their projections and installations that lit up the immense night landscape.

Then she also opened for us her own photographic journeying up to the Alma Observatory. In doing all this she toggled between modes of presenting what may be seen and reflections on her own perceptions of the world there travelled. As she gestured to the screen beside her we were transfixed by this extreme part of our own world, a place where space expeditions test their gear and where the world’s largest radio telescopic system constantly searches deep space.

Also very much part of Alessandra’s account was mention of  the sheer physical force of rising to higher altitudes in an oxygen enhanced bus to an altitude where thinner air is importantly clear and often dry.

The weight of the enormous landscape, swathes of dry earth curving upwards and onwards it seemed. Then there are the giant almost ivory monoliths of the radio telescopes. Concrete bases and heavy eye sockets. Reading spacewards, I thought at first, scanning the skies.

But this is a site for listening. Giant heads, all ears, gathered in listening posts, able to be turned and moved. They are grouped yet also spread out, enormous at close range and miniscule at a distance, almost lonely out there on the vast sepia of the Atacama. At times one can’t help thinking that these entities they have an agency all of their own, that they have deliberately gathered here themselves, and not been hauled upwards on giant trailers.

They stand sentinel like, waiting for sounds to arrive from space. Old sounds, almost hard to hear it appears as they do not visibly turn, but must be painstakingly oriented, sector set, researcher’s time pre-booked.

Alessanda shares with us her wonderment and her fascination and respect for the astronomers she met. Of how this site has become one of considerable significance for our understanding of space and of the matter that is communicated back to this unique location.

Her generous sharing of information and experiences give us an access that is both deliberate and always discursive.

She explains these sentinels relations to our data-driven understandings of landscape as we todays can see our own globe, beguiling yet constructing views via Google Earth. The abstractions and simulations scientists need to work with so as to project their potential prospecting of galaxies far flung to even secure time on these instruments. Then she weaves a narrative of how this immense data, transferred to other locations, is remediated, visualised and shaped through algorithmic modellings and selections so that indeed representations can be represented.

And we see these in lurid colours, a burst of purple and cyan, golden curls and splatterings of anthracite against the glitter of stars and distant matter on a seemingly infinite velvet of black, screen images on screens composed of sound, scattered and regathered, the simulation of time long past. Processes gone and dusted.

We too have temporarily been visitors to this plateau at over 5000 metres. In photos we have seen the crowd control barriers, absurdly arranged at the base of the radio telescopes. Yet not been able to zoom in very closely via our satellite imager Google Earth.

We have now seen that there is no where else on earth quite like this. Sounding the skies, seeing the skiens of the roads and pathways carved and worn into the Atacama earth to shift these giants of science.