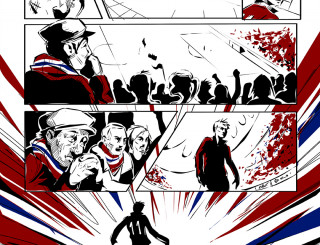 Great football experiences depend not only on the play on field but also on a contextual understanding of the moment, the sense of self in place and of belonging that can lead to highly emotional and meaningful moments.

This paper presents the outcomes of the research project between the Norwegian Football Association and the Oslo School of Architecture and Design during 2015. Using a methodology of research by design the project had a specific focus on heightening the experience of fans attending national team games at the national stadium.

Appropriate theory from social anthropology relating to myth and ritual was operationalized into a new service design model with the aim of orchestrating a new match day experience.

The resulting strategy does this by building a believable contextualizing myth that reflects the reality of the national men’s team. It then ‘performs’ this myth through, story telling, ritual structures and staged ritual interactions to further engage fans and players in the time leading up to, during and after the game, with the aim of creating a rich context and a dramatization that would build emotional entrainment toward a state of fan ‘collective effervescence.’

The paper opens with the argument that national football is a community ritual and as such a reflection and performance of national mood, values and identity.

It will present briefly the service design model that operationalizes the theory. Then it will describe how using the model has resulted in a new aesthetic for match day through a series of interventions at the national arena that include the stadium dressing, the theatrics of player arrival, story telling within the stadium and the opening ceremony.

Results suggest that orchestrating the match day experience in this way offers innovation in the designing, in ‘joined-up’ experiential planning and in new aesthetics, from a meta to detailed level, of the staged football event.

Matthews, T. 2016. 'Designing Football Rituals for Heightened Fan Experiences'. In The Beautiful Game: The Poetics and Aesthetics of Soccer in Transnational Perspective. Basel