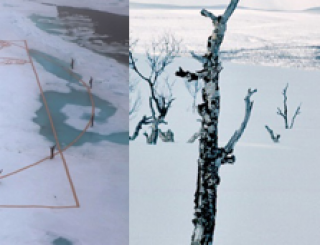 Modernist discourses of the arctic are peppered with the pithy tales of hardy, and sometimes foolhardy, male explorers. Heroic forays into the icy unknown are legendary as are the often valourous accounts of survival and triumph over the elements. While a growing historigraphy of such exploits is emerging in discourses of artic modernist critique, few contemporary accounts exist that offer counternarratives. Drawing on postcolonial theory and subaltern studies, co-design dynamics and the polyvocal theory of Bakhtin, we offer an alternate narrative account of the future north. This is a co-constructed fictioning of arctic imaginaries that are located in discourses of today and yesteryear. In this paper, members of a research project team reflect on their shaping of a narrative account posed through the persona of a narwhal called Naratta. This persona is collaboratively scripted, drawing on our shared expertise and discursive practices that include architecture, urbanism, literary and media narrative, applied discourse analysis and interaction design. In this context, re-fictioning refers to a deliberate and reflexive attempt to interrogate predominant and emerging narratives of the Future North and the force of modernist tropes. Our paper is explicitly performative in its stance; it shifts between expository and poetic modes of articulation in building a counter narrative. Drawing on a blog authored by Narratta we interrogate readers’ expectations about arctic landscape and geo-politcal expediency; we cast off from tethered shores and venture into an expressive yet critical voice to enunciate a discursive design. This is one that is speculative and conjectural, yet it is bouyant with matters of immediate concern, momentarily visited and then jettisioned through pastiche and irony. These devices dive into the past and reach into the future between flows of ice and the melting of modernism.