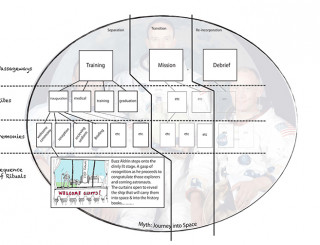 Rituals give structure to time, offering passageways to special experiences through contact with artifacts, shared performance and the narratives of myth. This description has resonance with definitions of Service Design, which is often referred to as the design of experiences that happen over time and across different touchpoints. The work presented here is part of an ongoing research project that aims to utilize knowledge of the sacred, ritual and myth such that it can be used in developing service experiences. Its underlying logic is that ritual structures offer new ways to design with time, the non-physical and in turn the orchestration of special experiences for customers.

The Experiential Mesh model is an operationalization of theory, mainly from social science, relating to ritual, myth and the sacred and its application to the design of services. This paper presents work still in development in the form of a second iteration of the model.

The model has been previously trialed at one of Norway’s leading Telecom companies (Matthews 2013b) during which it was tested in what could be described as a purely functional setting. To develop the model further, an experiential service context was chosen. To this end, and as part of the collaboration between Oslo School of Architecture and Design and Chulalongkorn University in Bangkok, a workshop was arranged over two days that would test the model in developing a new experiential service offering for the island of Si Chang in the gulf of Thailand. It is the results of this workshop that are presented here.

These results suggest that the developed model of the mesh, and its initial embodiment described, offers new structures and layers for generating coherent orchestrated tourist experiences. The implications of this for service design are discussed, and areas for further work identified.