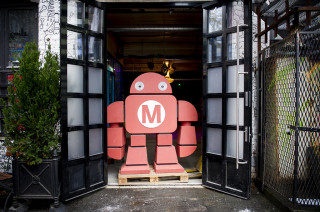 The first nordic MakerCon conference took place in Oslo between 17th – 18th of October 2014, with AHO well represented at the event. It saw contribution from both alumni students, faculty staff, as well as design researchers from the Institute of Design at AHO.

MakerCon was a two-day event, held at Ingensteds, in the cultural hotspot of Grünerløkka in Oslo. Held for the first time in Europe, MakerCon is the continuation of the successful event of the same name,first held in 2012 in San Mateo, California. MakerCon has a strong connection to Maker Faire, which is also born out of Maker Media Inc., the company behind Make: Magazine.

The conference was an intense two-day event, featuring talks and discussions as diverse as patent laws, to ‘Evolutionary algorithms as a design tool’. William Kempton, a PhD-fellow at AHO, focused his talk around Product Design and Additive Manufacturing. The talk, entitled “Hovering Clouds: Looking at online tool offerings for Product Design and 3D Printing”, presented online product design tools, as well as discussing models for allowing increased end-user influence in the space of product design. Hans Gerhard Meyer, lecturer at AHO and self-proclaimed ‘maker’, presented the talk ‘Make and break’, reflecting on his experiences as multi-disciplinary artist. As a manifest to AHO being an environment for innovation, alumni student Hans Jakob Føsker presented the Polarworks 3D printer, a collaboration between him, Alexandre Chappel and Oslo-based design agency Bengler.

Discussing the future of 3D printing Wrapping up the first day of events, a panel discussion was held, featuring Mike Senese (Make Magazine), Espen Sivertsen (Type A Machines), Erik de Bruijn (Ultimaker), Hans Jakob Føsker (Polarworks) and William Kempton (AHO). In the discussion, which focused heavily on future predictions in Additive Manufacturing and 3D printing, discussed among other things, on its effect on education. William Kempton, an advanced user of desktop 3d printing tools, stressed the importance of interation and scaleability when implementing 3d printers in education. Mike Senese brought in Minecraft as an example of a great “gateway” for next generation designers. Erik de Bruijn, a strong Open Source advocate, stressed the importance of sharing knowledge for future innovation. Espen Sivertsen concluded that we have passed the biggest bulk of the “hype” surrounding 3D printing. MakerCon is a two day conference by and for makers about hardware innovation. It is a conference about making things and sharing ideas. The conference invites makers from all over Europe to come and share their experience and expertise in fields such as digitial fabrication, design, prototyping, crowdsourcing, crowdfunding, and production.

Read more reviews of the Oslo event from the Make blog here.